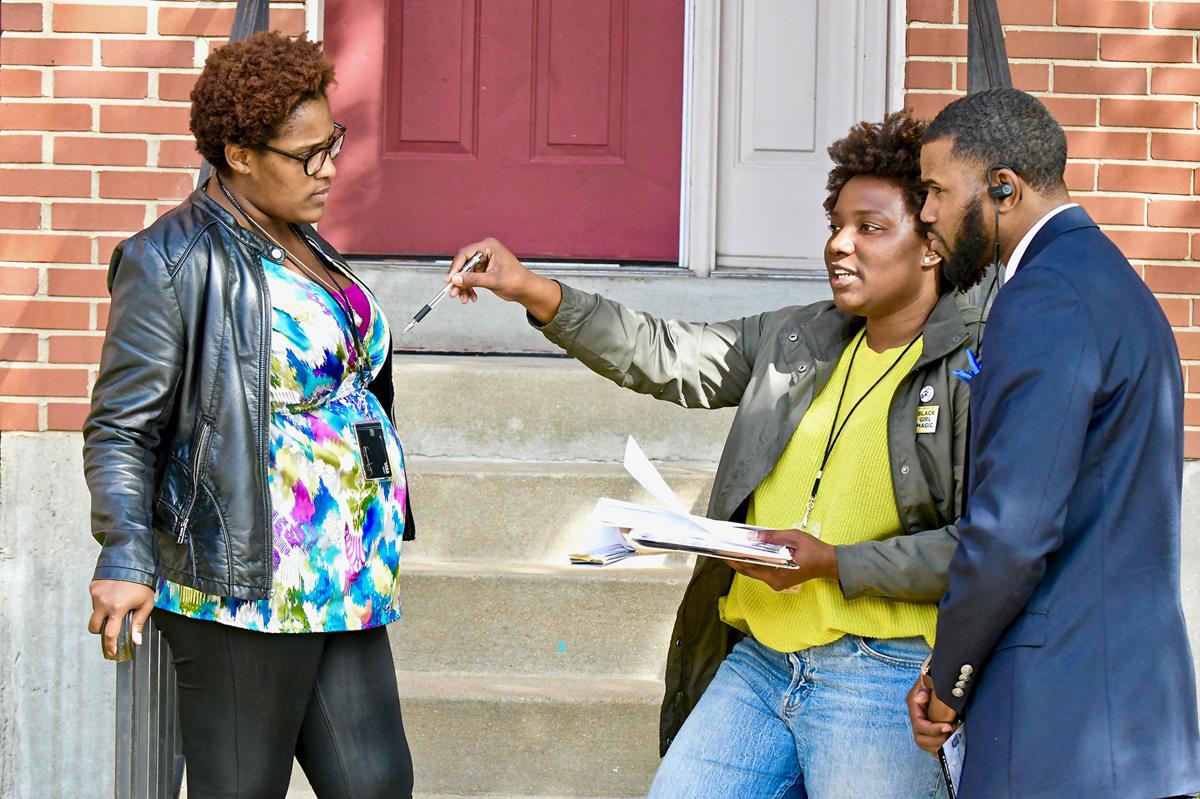 Elise Hawkins and Monti Hill spoke with Jerome Harris on Tuesday, October 30 as they canvassed the 3700 block of North Market Street to help get out the vote for the November 6 general election. Photo by Wiley Price / St. Louis American

Every day, North St. Louis resident Monti Hill knocks on doors in the three wards that have the lowest voter turnout in the city – the 3rd, 4th and 22nd.

“We just want this to be a resident-led campaign,” Hill said. “We are really concerned, and we want to do more in our community.”

Hill and her crew are part of the WePower Better Budgets, Better Schools initiative that started six months ago. They are all North City residents. (There is also an East St. Louis group.)

“We are also Saint Louis Public School educators, students, alumni, parents, aunties and grandparents of students,” according to the group’s website. “As such, we care deeply about the city’s public education system and work together to improve it out of a place of love.”

They learned that a considerable number of people in these three wards are registered to vote, but they often don’t have the resources or support to get to the polls, Hill said.

“We can increase that,” Hill said.

Getting people to vote has become a way to engage people in the voting process while soliciting thoughts and concerns about the public schools.

When they talk to people, they ask them if they plan on voting. They explain that the polls are open from 6 a.m. to 7 p.m. Tuesday, November 6 and ask if they know how to look up their polling location (visit Bit.ly/lookuppoll).

Hill’s team explains which forms of ID to take to the polls. You only need one of these: a voter registration card, utility bill, bank statement, paycheck, Missouri driver or non-driver’s license, non-expired military ID, U.S. Passport, ID from a Missouri college or technical school. They also explain that no photo ID is required to cast a ballot, since a court ruling in early October. If voters are asked for a photo ID, Hill explains that they should call the election board (314-622-4800 in the city, 314-615-1800 in the county).

Also, voters who encounter problems at the polls can call the Missouri Election Protection Coalition hotline at 1-866-OUR-VOTE (866-687-8683), which is part of a national effort.

Aside from voting information, they also let residents know about the Better Budget, Better Schools public hearing on why equitable school funding matters. It will be held from 6:30-8 p.m. Wednesday, November 14 at Central Print, 2624 N. 14th St. It’s free and open to the public with dinner provided. RSVP at bit.ly/bbbspublichearing.