Visioning Our Futures through Courageous Conversations

As part of WEPOWER’s Engage Community programming, the St. Louis organization is partnering with Black Futures Lab on the Black Census Project. The project engages Black residents in conversations about what’s important to us. Be heard!

FILL OUT THE CENSUS 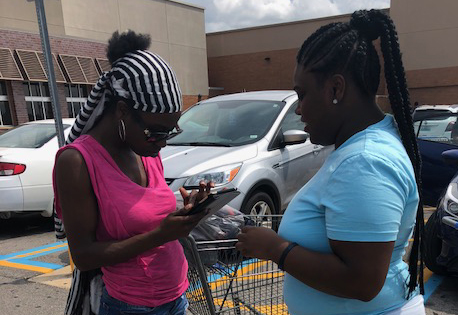 The training was unlike anything that I had ever experienced. There were around thirty black organizers from all over the country, gathered in a hotel ballroom in Downtown Atlanta. We traveled from Las Vegas. Mississippi. New Orleans. New Jersey. Charli, Alexis, and I: representing St. Louis. There were folx who had been organizing for decades. Folx in their 50s and 60s. Students about to wrap up their undergraduate career. And there was me. Green as you can get as an organizer. No experience. But with a perpetual desire to amplify the voices of black folx in this country. Maybe that’s what we all had in common, actually? We were there because black folx deserve this work. And because we recognized that we are all worthy of this space being made for us.

But, still, I was nervous. And struggling with feelings of insecurity and imposter syndrome. Did I deserve to be in that room? What I learned throughout the training, though, is that it was so much less about how many years of organizing I had on me; and so much more about choosing to show up. Showing up for myself. Showing up for St. Louis. Showing up for black folx.

The nerves would flare up throughout the three days, though. But never as intensely as when we were trained on the census tool and then sent out into the city to begin engaging black folx with it.

Half of us were driven to the Mall West End in a predominantly black part of the city. And an even smaller group of us went to the food court — which was maybe less of a “court,” and more so just a cafeteria with one place to order food from and ten or so people sitting about. We walked to the court, iPads in hand, sporting our “Black Futures Lab” shirts. I also probably had a deer in headlights look. It was like that scene in a movie where everyone turns and stares. We stood out.

So I gave myself a few beats. One. Two. Three. And approached a pair of two older black womxn. I fumbled on the talking points. Forgot to introduce myself. Promptly apologized for being rude. And was greeted with their grace and kindness. It was grounding.

My co-organizer, Alexis, has felt equally inspired. Gifted with the opportunity to do the work in St. Louis, the city she grew up in, she talks about its significance: “Since I’ve joined the Black Census Project, I have been able to be myself. Being able to go around my community, my city and beyond is just what I needed to open up and have my voice heard. As a millennial it’s hard to get someone to understand how you feel or even have the courage to do something like this. I have been amazed by what people have had to say. I have also been thrilled to see people like me care about the things I feel strongly about. I am not just any person anymore. I am now a young woman who wants change, and if you don’t change nothing, nothing will CHANGE.”

My interactions with black folx for this project have felt vital in the way I understand my life story. We meet each other where we are at. Laugh at the ways we fumble. Get fired up over the ways we want to see change. And feel connection over these shared visions.