Children are not problems to be solved, but humans to be loved | The Belleville News-Democrat

BY BRENDA RAY FOR THE BELLEVILLE NEWS-DEMOCRAT 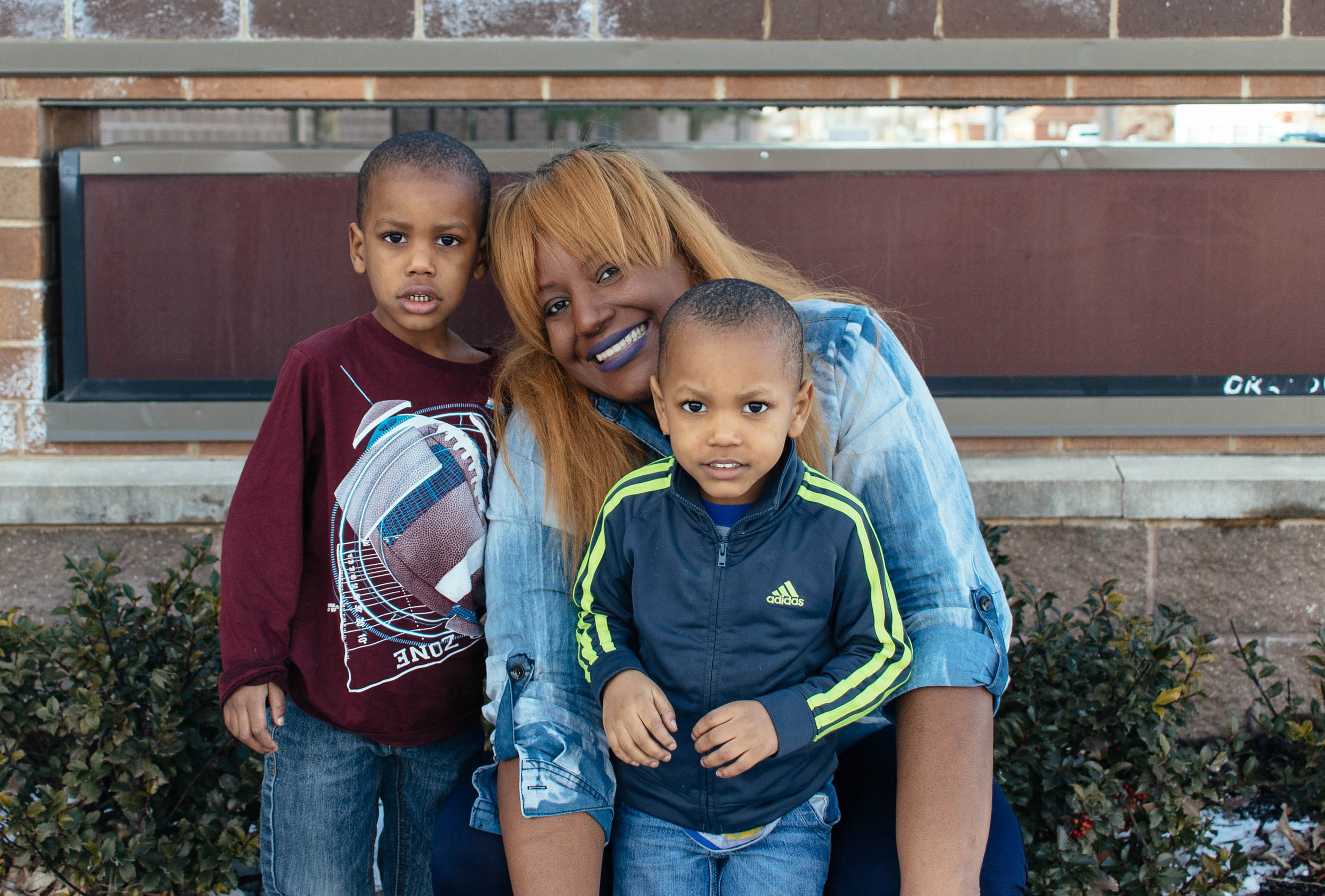 Brenda Ray with her two boys in front of Mason Clark where she attended middle school. Brenda is a power-builder in WEPOWER’s East St. Louis Education Power-Building Academy, a seven-month community-based leadership and policy change program for residents of the area. Photo by Kristen Trudo.

There’s the person you are, and then there’s the person people see. And for me growing up, there was always a big gap between one and the other. In school, people knew me for my behavior problems. They didn’t really know what was going on outside, just that Brenda got in trouble a lot.

Every time I got called to the principal’s office – every time I got in trouble – they automatically assumed I did it. I couldn’t plead my case because in their eyes, I was this problem child. They didn’t wait to see who I’d turn out to be, who I was trying to be – wouldn’t just let me be me. Instead, they’d decided who I was before I could ever decide for myself. They’d put me in a category.

That’s what it was like for me, growing up at a couple schools in East St. Louis School District 189. I was a foster kid – bounced around my whole life, going through the kind of pain and trauma most people can’t even imagine, just trying to survive. But to most of the teachers and staff, I was just a behavior student, a criminal.

In sixth grade at Clark Middle School, I got into it with a girl from my homeroom. The principal was there, yelling at me to go to his office. He grabbed me and pinned me up against a locker. He shook me. You know, I warned this man three times, “Mister, do not touch me, you are not my dad.” And he still picked me up. I was 11 or 12 years old, and a grown man put his hands on me. I did what anyone else would do, I reacted. All I knew was to swing and then – he body slammed me. Next thing I knew there were two or three security guards around me, putting me in handcuffs. I got suspended for 10 days.

So I was young, I was a kid. I got into fights. I had a lot to be angry about. But I was still human, and there were people who saw that. In fact, when I came back to school, when I walked back into class after that suspension, all the other kids started clapping. They could see it; how I’d been treated, how we were all treated.

There were adults, too, that saw me, that took my side – my basketball coach and a lady in the office named Ms. Patterson. “Brenda needs some TLC,” she’d say. “That’s all she needs is some TLC.” They took me into their hearts and under their wings. They took the time to talk to me when they saw I was upset or got in trouble. I remember Ms. Patterson would take me to school sometimes because she lived around the block, or she’d take me somewhere to get food. If the other kids could see, if Ms. Patterson and my coach could see, why couldn’t anyone else?

But I’m still standing. Since high school, I knew what I wanted to do with my life. I had a plan, and I had a goal, and I had a dream. I had an older sister who overcame all the odds and earned two or three degrees while raising three children, so I knew I could do it too. And I did, and I’m doing it. I graduated high school, went to college, worked a job in youth in foster care, had my own kids, left college, went back. Now I’m getting ready to graduate this year with an associate’s degree in human services. I’m going to be a social worker, and one day, I’ll open up my own nonprofit organization for youths in foster care. I’m proud of who I am, what I’ve survived, and what I’ve accomplished. But for the most part, I did it all in spite of, not because of my education in District 189.

I moved out of the Eastside after my freshman year of high school to Carbondale, then to West Frankfort. I ended up in an all-white neighborhood, at an all-white school. And it was a huge culture shock. No one had taught me who I was, how the world was going to see me, or how l was going to succeed in it. I almost didn’t graduate – I was taking freshman classes as a senior because I wasn’t at the academic level I needed to be. In college at Southern Illinois University Edwardsville, I wasn’t prepared either. I didn’t have the right study habits, didn’t know how to take notes properly, couldn’t keep up with the professor sometimes. I hadn’t picked up those tools I’d need for college or the real world. My education had failed me.

I figured it out. I adjusted and adapted. But I had to do it by myself. I struggled for it, and that’s not fair to any child. I’m here standing strong, still going, still going to graduate, but I firmly believe that people go through things in life for someone else. So that they can help someone else. And from where I am, I don’t want anybody to go through what I went through. Not my kids or anyone else’s. That’s why I decided to join WEPOWER, so I could learn how bring change to my community and the district. We’re leading the Rise 189 campaign in hope for a better future for our children. 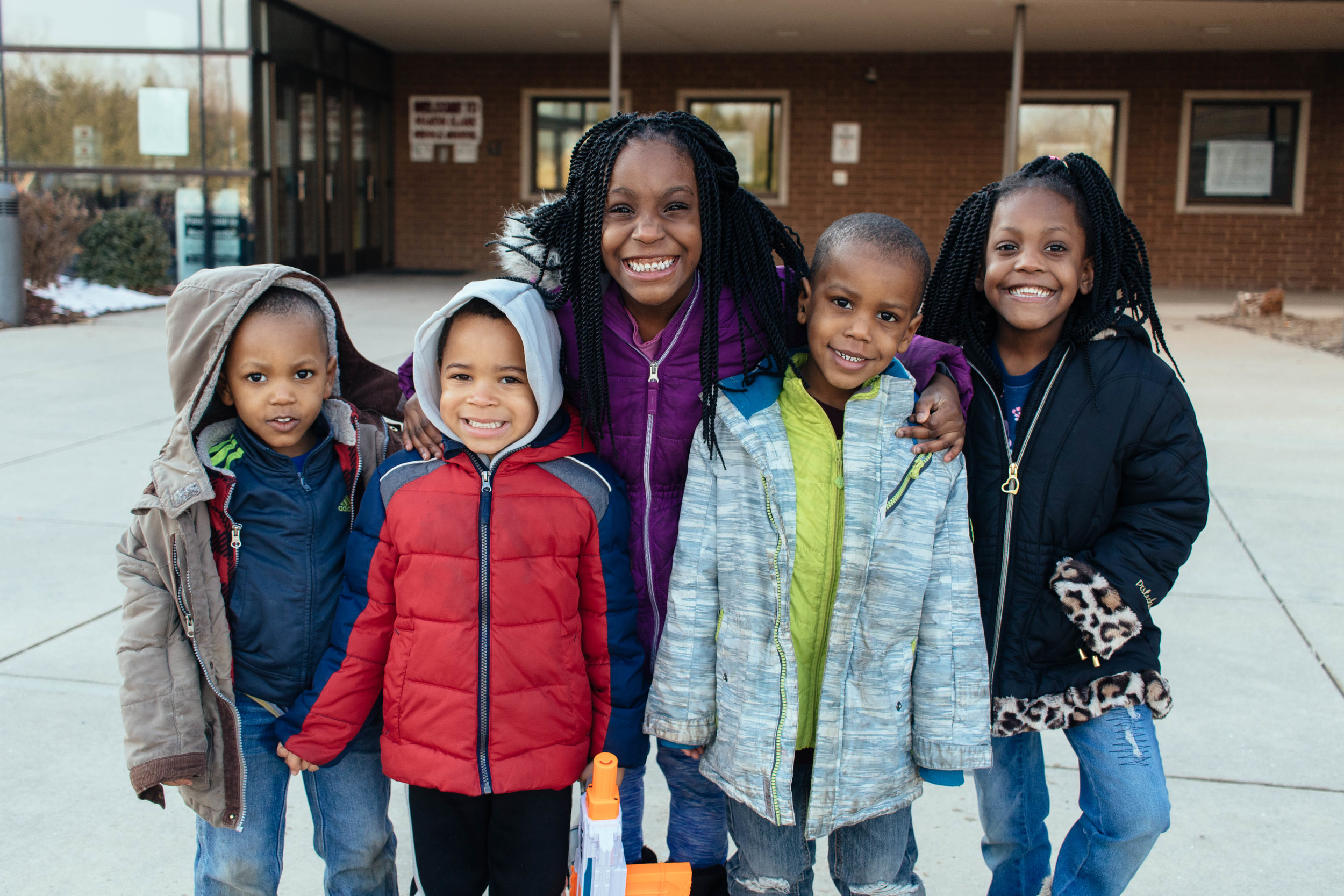 I have two kids right now at Vivian Adams Early Childhood Center, and while some things have changed, I find that my children and myself are, again, misjudged and categorized. Because we live in an impoverished community, they treat my kids like victims and come after me. Someone threatened to call DCFS on me recently because my kids didn’t have uniforms. This can’t be the way. This can’t be what it feels like to be treated as a human, to be seen for who we are instead of whatever label is easiest to put on us.

It’s time for District 189 to listen to its students and to their parents and guardians. It’s time to raise standards, to build on the trauma support work happening at the Family Engagement Center and in staff trainings. It’s time for us all to get involved, to partner with the board, administrators and teachers by supporting them and holding them accountable. I want to see my kids able to learn and to be comfortable learning. I want them to be secure and successful. I want them to be seen and acknowledged – not as problems to be solved, but humans to be loved; precious, resilient humans with plans, goals and dreams.

Rise 189 recently had an initial meeting with the superintendent. His response to our solutions left us hopeful that we can partner with our district leaders to take our schools to the next level.

I want to invite you to the upcoming school board meetings. We’re testifying for greater accountability and resident engagement and delivering letters to school board members. The next meetings are on Tuesday evenings – March 19 and April 23 at 6 p.m. at 1005 State St. in East St. Louis. Learn more and send your own letter of support online. 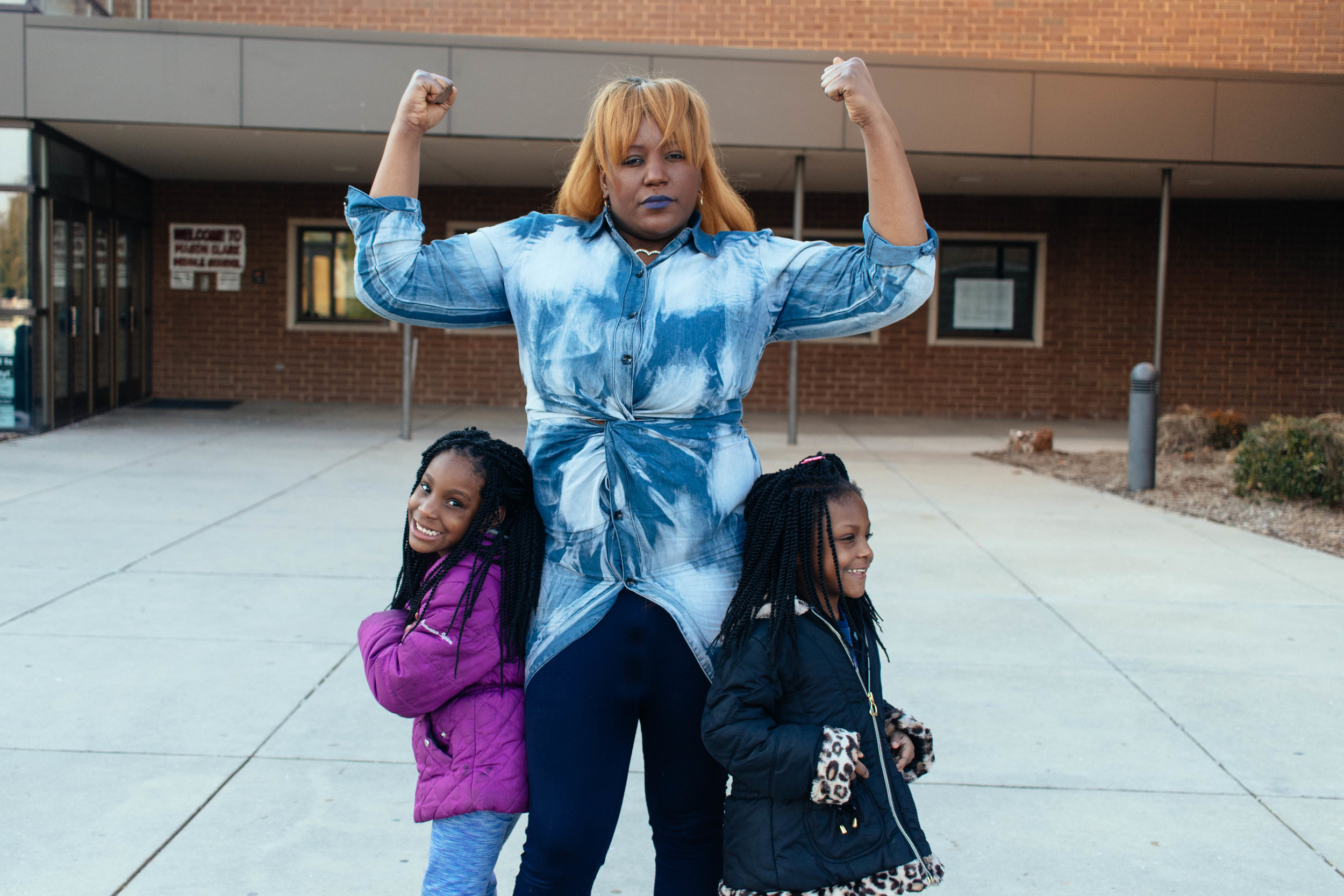 Brenda and her two daughters. Photo by Kristen Trudo. 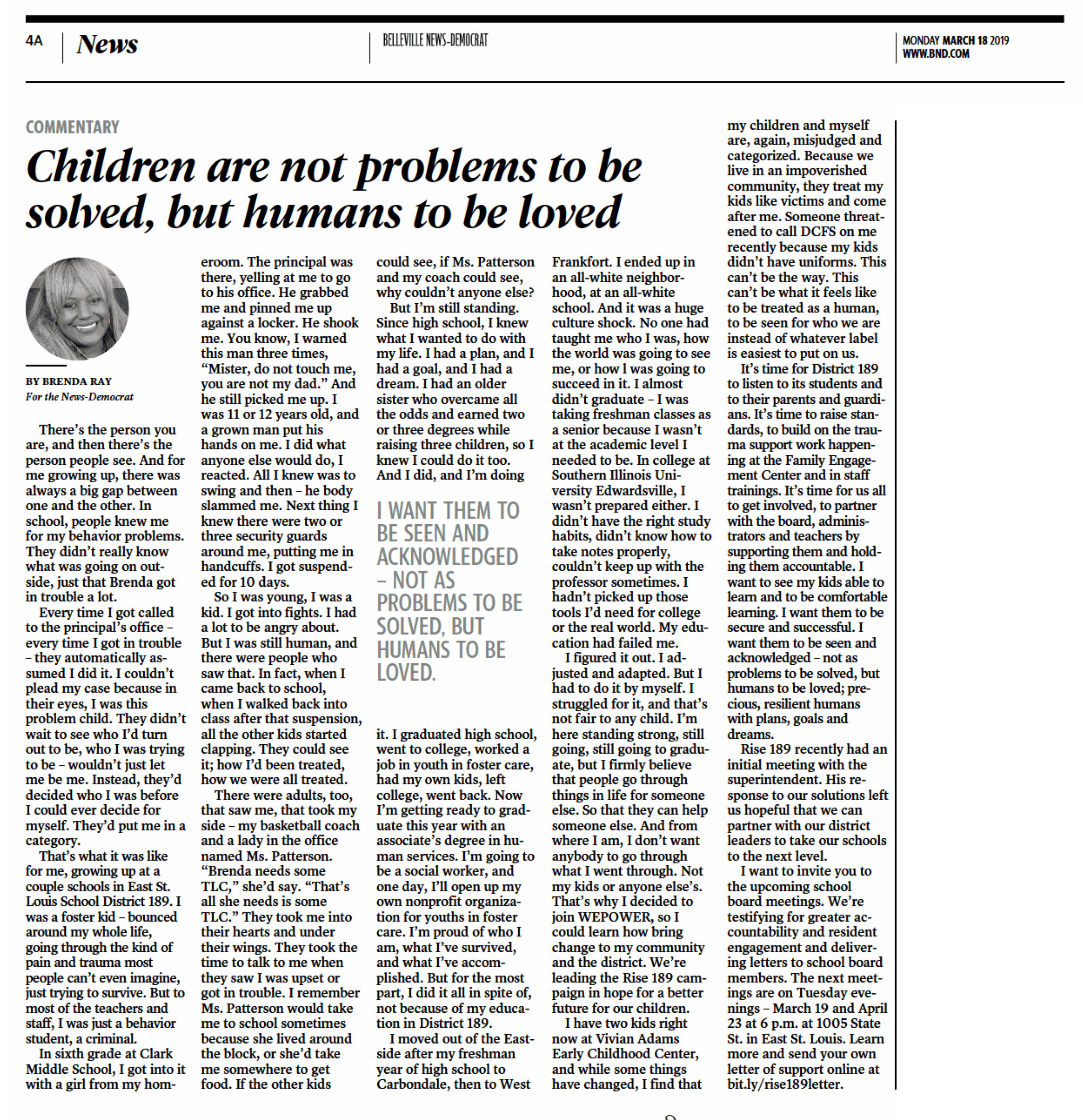