I’m calling on my neighbors to improve our schools, our homes | The St. Louis American 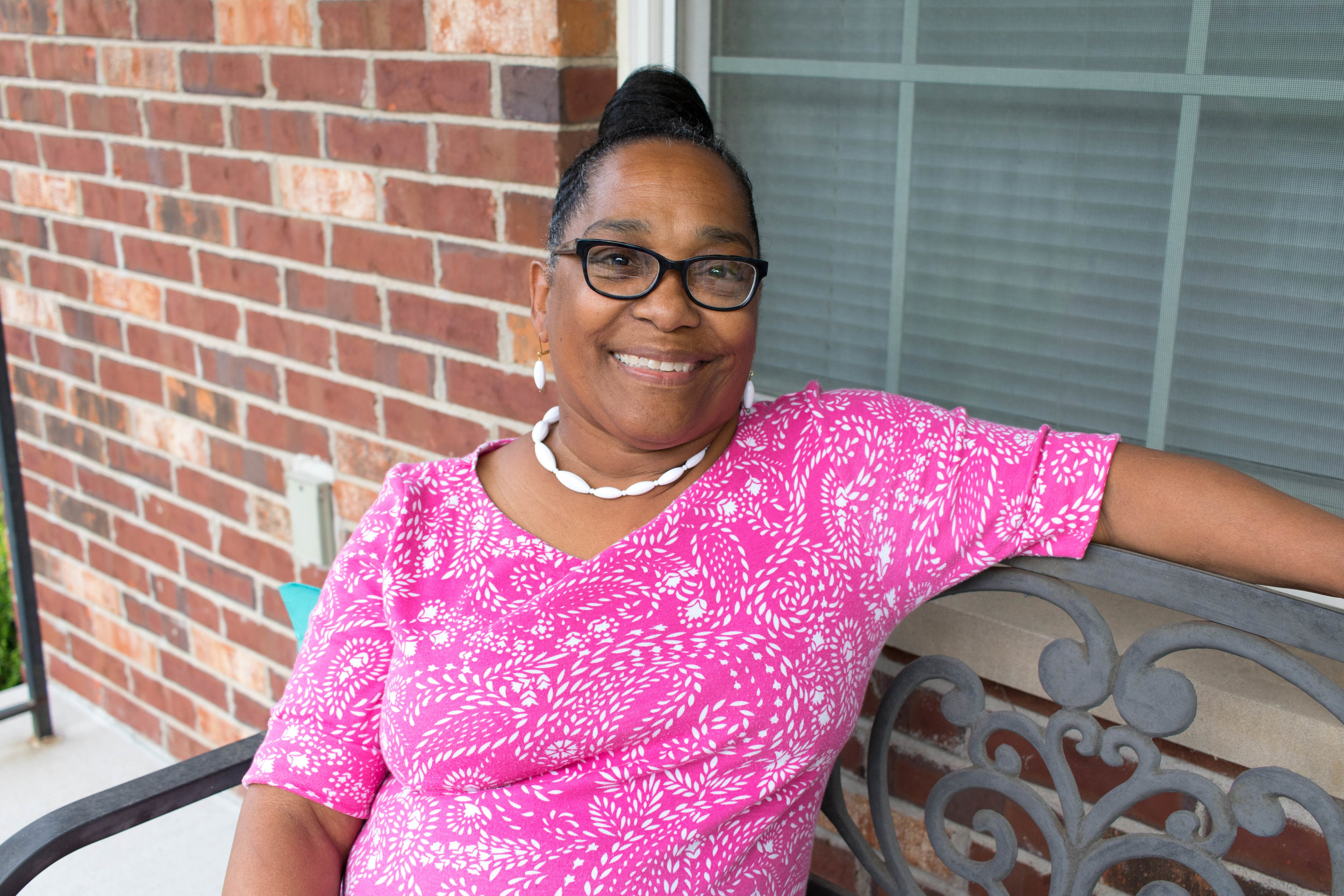 Janet Roberson is a board member of Northside Community Housing and a recent graduate of WEPOWER’s Power-Building Academy. She is pictured here on her front porch in The Ville neighborhood. Photo by Kristen Trudo.

You’re looking at a miracle. I had open heart surgery and two strokes.

I wanted to volunteer in retirement, but I never got a chance to because I kept staying sick. So once my youngest grandchild started school, I decided it was time to go do something. I told myself, “I’m not an old lady. I’m 61.”

That’s when I went across the street to Northside Community Housing and offered to volunteer. They said, “Oh, you came right on time, Ms. Roberson. Can you do this? Can you do that?” I just started doing odd things around the office. Eventually, I started going around, inviting people to financial planning classes about how to buy a house. I would tell them, “Hi, I’m Ms. Jan; I live at the house on the corner.” That connection would make them feel open and want to learn more.

When I’m talking with my neighbors I meet young people and people my age who have never been able to buy a house but who want to. Home ownership is special – when you have something of your own that you worked for, it makes you feel good.

But this town’s segregated. It was when I grew up downtown in Pruitt-Igoe, and it still is. And where you live – whether you own or rent – that dictates what kind of education you can access.

I have three grandchildren. The two in St. Louis – Jaden and Chloe, when we were looking for schools for them, I realized the three schools near my house were all boarded up. With no money for private school, I signed up for the deseg and magnet school lotteries, but we weren’t picked. We were stuck. So we started at a charter school.

Now, I often volunteer in the school’s classrooms. Before retirement, I was a substitute teacher and also a social worker. My mom was a social worker too. She was very much involved in the community where we grew up. I have kind of fallen in her footsteps in that way.

Knowing this, the director of Northside Community Housing told me about WEPOWER, and that their Education Power-Building Academy was about building with the people in our community.

So I joined, and there were all different kinds of people and all different types of thinking in the group. At first we grouped ourselves by age – young people one side, older people over there.

You could feel tension at the start of our discussions – but not in a bad way. At first it was kind of hard to hear experiences from a different generation, because even though my generation grew up segregated, the younger generation, they know about prejudice, but they know it in a different way.

But when we started learning to speak from our own experience and consider what other people felt – not just our opinion – we became closer to each other, more like a family. We built respect and trust across generations.

Some of the young people’s opinions or answers made me think, “Wow, I never thought of it like that.” This pushed me to start thinking outside of the box and about the power we have within us – that sometimes we don’t really think of – power that we don’t know we have.

When we shared our experiences with education with one another, the question of why some public schools were resourced more than others kept coming up. We looked into it, except that while our district operates a budget of almost $300 million, the breakdown of that budget is not accessible to parents and residents.

After reviewing how other districts nationwide have leveraged transparency and collaboration with the community to improve student performance, we created three policy solutions. They are intended to increase transparency and community involvement in our district’s budgeting process. We launched the Better Budgets, Better Schools campaign to advocate for the district to adopt these solutions.

I’m calling people about the school board candidate forum that’s coming up on Saturday, March 30 from 1-3 p.m. It’ll be at O’Fallon Park Rec Complex YMCA at 4343 W Florissant Ave. Two seats on the city’s school board are up for election on April 2. We will be asking candidates the tough questions to learn more about their positions. The elected school board will be gaining power back from the appointed board soon, making this election that much more important.

My grandchildren will be on summer break soon, and we are looking for summer activities. When I’m talking to people, I tell them it’s worth their while to come because we’re giving away two $200 activity scholarships for youth to use this summer! Everyone who attends is entered to win. 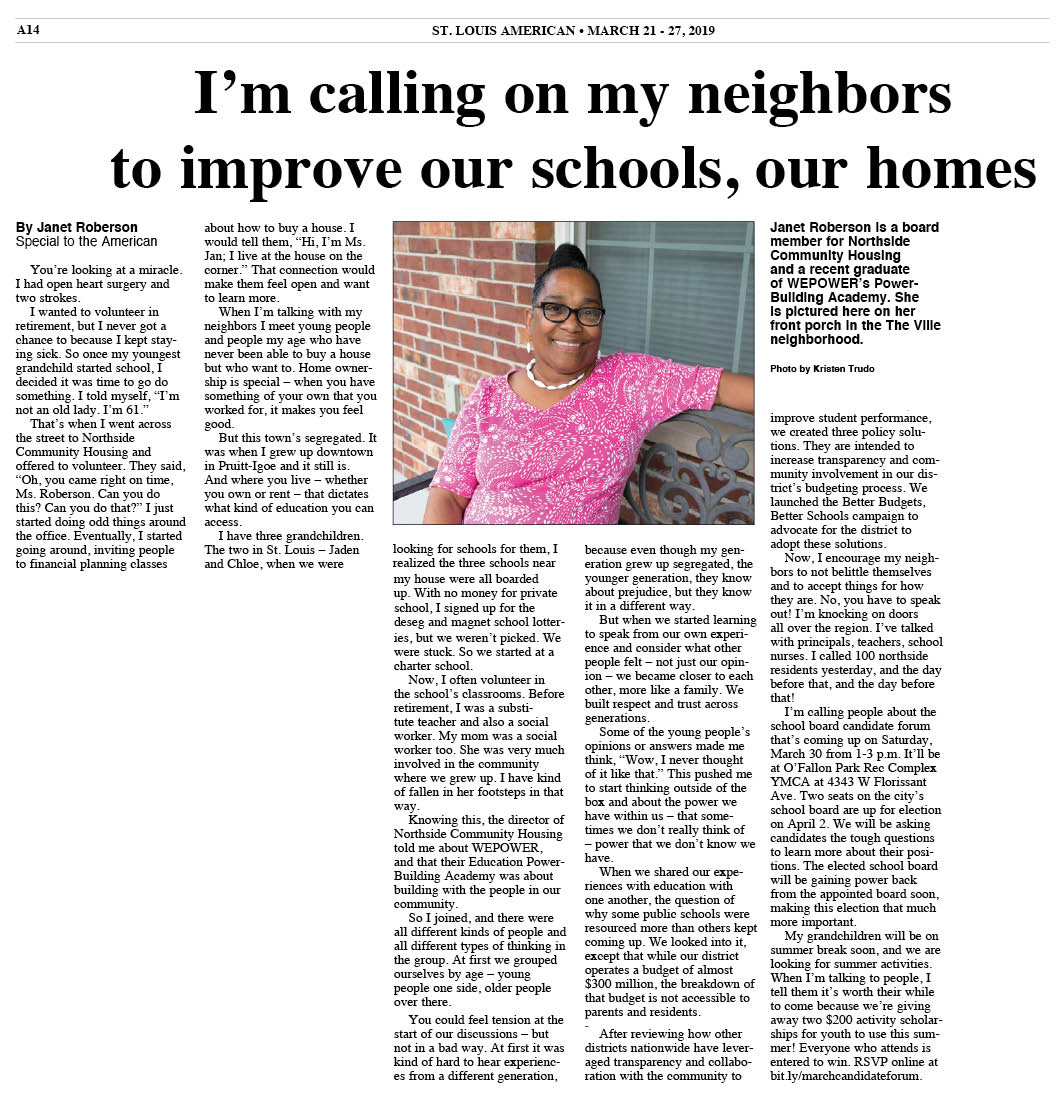