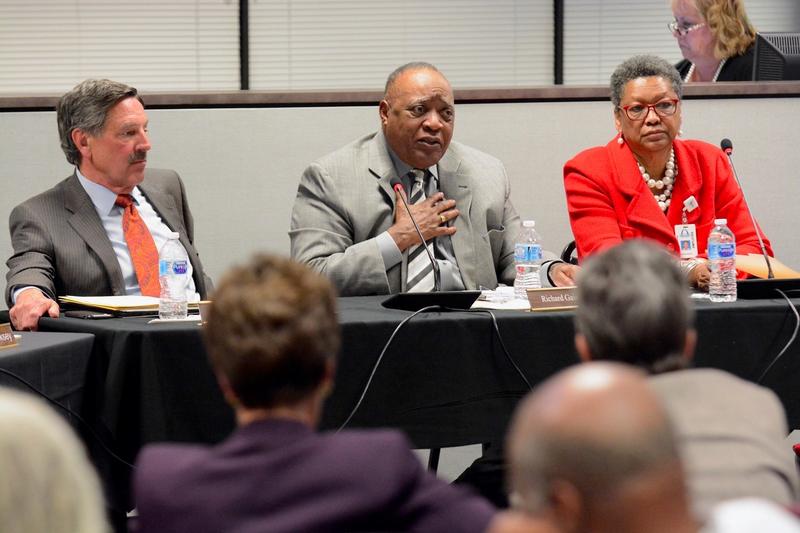 The Special Administrative Board of St. Louis Public Schools at a March meeting. The administrative board has governed the school district for a decade.

St. Louis Public Schools’ budgeting process is too insular for parents and teachers to understand and contribute to, a group of north St. Louis residents claim.

That group, under the banner Better Budgets, Better Schools, will launch a letter writing and advocacy campaign this weekend to call for more transparency in how SLPS spends its money.

“I definitely feel strongly the money is not being spent how it’s supposed to be spent,” said Alexis Bates, a 20-year-old Mark Twain neighborhood resident whose daughter is a second-grader at Gateway Elementary School.

The Better Budgets, Better Schools group is made up of Bates and 15 other north St. Louis residents who are a part of a community organizing training program. They say parents, students and teachers aren’t given the opportunity to understand and contribute to the budgeting process.

The group wants the district to increase public outreach and inclusion of residents in decisions on how money is spent.

SLPS had a $25 million deficit when it was taken over by the state in 2007. That’s been reversed to a $19 million surplus, done so in part by closing schools like Mark Twain, where Bates attended.

The district’s budget page offers visitors the 16-slide presentation of the budget that was delivered this spring at two forums. It takes more clicks to get to the 88-page budget book.

The district also accepted public comments online before the budget was approved. The first of those two budget presentations, held at district headquarters downtown, was sparsely attended.

The letter writing event is from 2:30-4 p.m. Saturday, at the Julia Davis Branch of the St. Louis Public Library 4415 Natural Bridge Ave.