Why I care about East St. Louis public schools | The St. Louis American 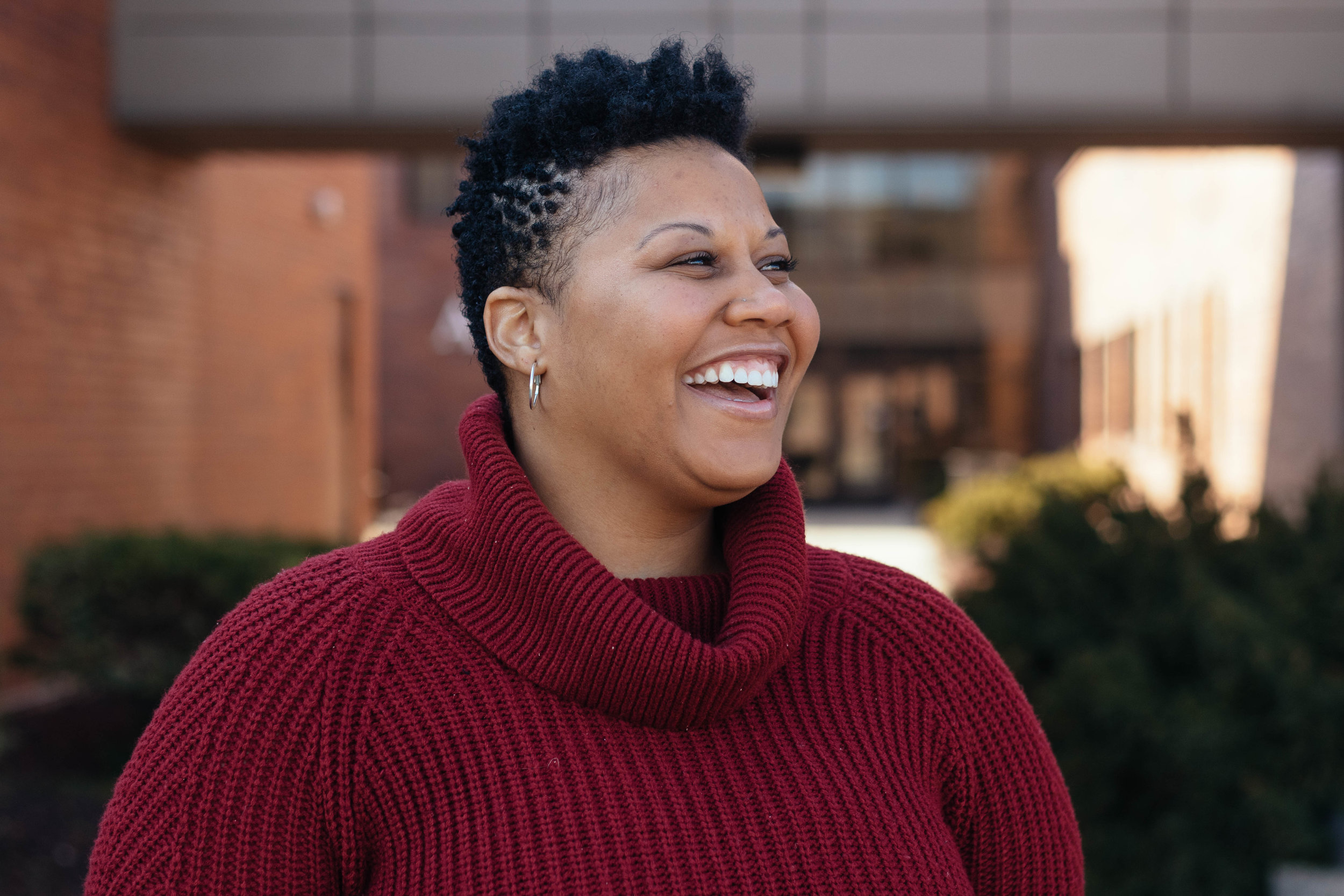 Jessica Fort is a power-builder in WEPOWER’s East St. Louis Education Power-Building Academy, a seven-month community-based leadership and policy change program for residents of the area. Photo by Kristen Trudo.

I grew up cleaning these neighborhoods. My mom and my grandmother had me picking up trash off the streets of East St. Louis while, in my head, I was dreaming of living someplace else. Some place I could have a mansion and where I didn’t have to clean up after anyone. As a child, in my mind I was thinking: if other people don’t care enough about this city to be cleaning after themselves then why should I care? That’s how it goes in East St. Louis sometimes. People move up and move out. I could do that, but I’m not. Because in the end, I do care, and I want to show it. I want my city to be thrive. I want our city’s physical beauty to match the beauty of our history.

I grew up in district 189. I attended every elementary school and a couple middle schools before heading to a charter school for high school. I liked going to school back then, and I liked my education. I didn’t have anything to compare it to. But in hindsight I know that everything was getting worse and the education I received lacked in critical areas.

It all caught up with me in college when, for my freshman year, I attended the University of Illinois. Going to a predominantly white school, I learned real quickly who I was to them. I’m black and female? I thought, Wow, y’all really hate us in America.

I immediately felt inferior, like I couldn’t keep up. I was behind in writing and science, yes, but it wasn’t just academics that were tripping me up. It was watching all these other kids surviving and functioning, but not having any clue how they did it. Nobody seemed to be asking questions, nobody seemed to struggle like me.

Turns out there was a whole social-cultural piece of school I missed out on. The other students were talking to teaching assistants, taking advantage of tutoring services, connecting with and helping each other—networking in ways I had never been taught. They were taking 12 to 15 credits instead of the 18 I’d taken on without even knowing what was normal. And on top of all that, I’d somehow internalized that I couldn’t compete there. No one validated that I was just as smart, just as deserving as everyone else. I’d never learned that even though I came from a a poor, black, urban area, I wasn’t less than anyone else. So of course I wasn’t confident. Of course I didn’t raise my hand even when I thought I knew the answer. I just wanted to fade into the background. 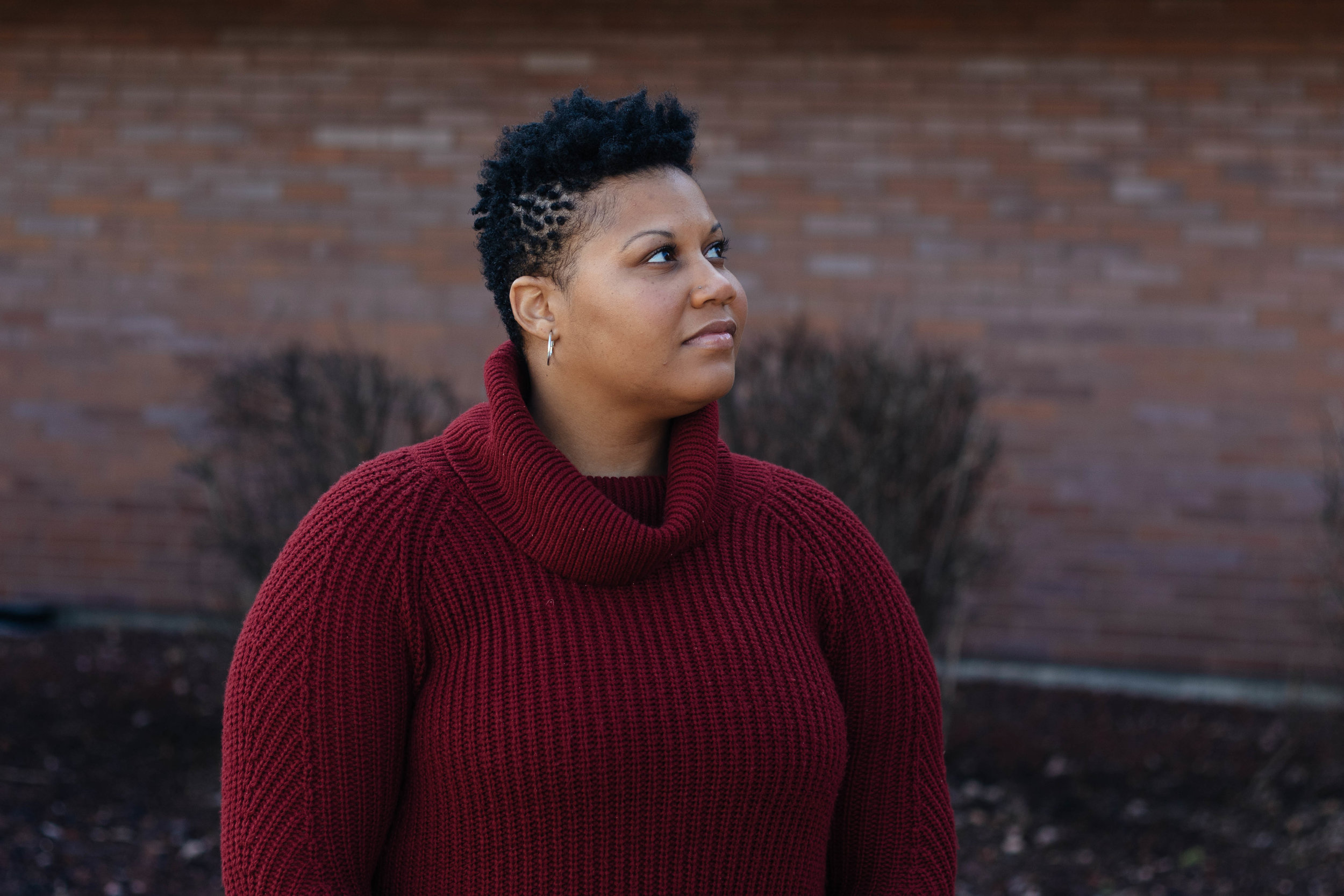 Looking at the state of schools in District 189, it’s not hard to see how kids grow up unprepared and feeling inferior. They barely have the materials they need and the instruction they receive doesn’t acknowledge the reality of their daily lives. They don’t see themselves reflected in anything they read. They don’t receive support for all the social-emotional challenges they’re facing. No one tells them that their circumstances aren’t their fault. No one tells them about all the systemic issues that create the conditions they live in.

We need a school system that meets students academic, social, and basic needs. Students might not have had breakfast. They might be accountable for adult responsibilities like taking care of their younger siblings. They might be dealing with a mentally ill parent or violence in the neighborhood. They show up with the trauma of systematic racism on their shoulders and are just expected to grow in an environment that doesn’t value them as human beings. No one acknowledges that their walk is harder than others, and no one tells them that it doesn’t have to negate their success.

When I was a kid, picking trash off the streets, dreaming of living somewhere else, I couldn’t see the beauty of my city, but now I do. The beauty is in every kid who is fighting for survival and a sense of self worth in a society that tells them they are less than and worthless. As a community, as the people of East St. Louis, we, we have to join together and fight with our students. We have a responsibility to give them the skills and confidence we wish we’d been given. That’s why I’m standing with the Rise 189 campaign.

On Thursday, February 21st, I will introduce the campaign at a Teach-in event. I welcome you to come to learn more from 5:30 to 7pm at Emerson Park Development Corporation. We will provide childcare. If you can make it, RSVP online.

I hope you join me. Our school district must rise to match our eastside excellence. 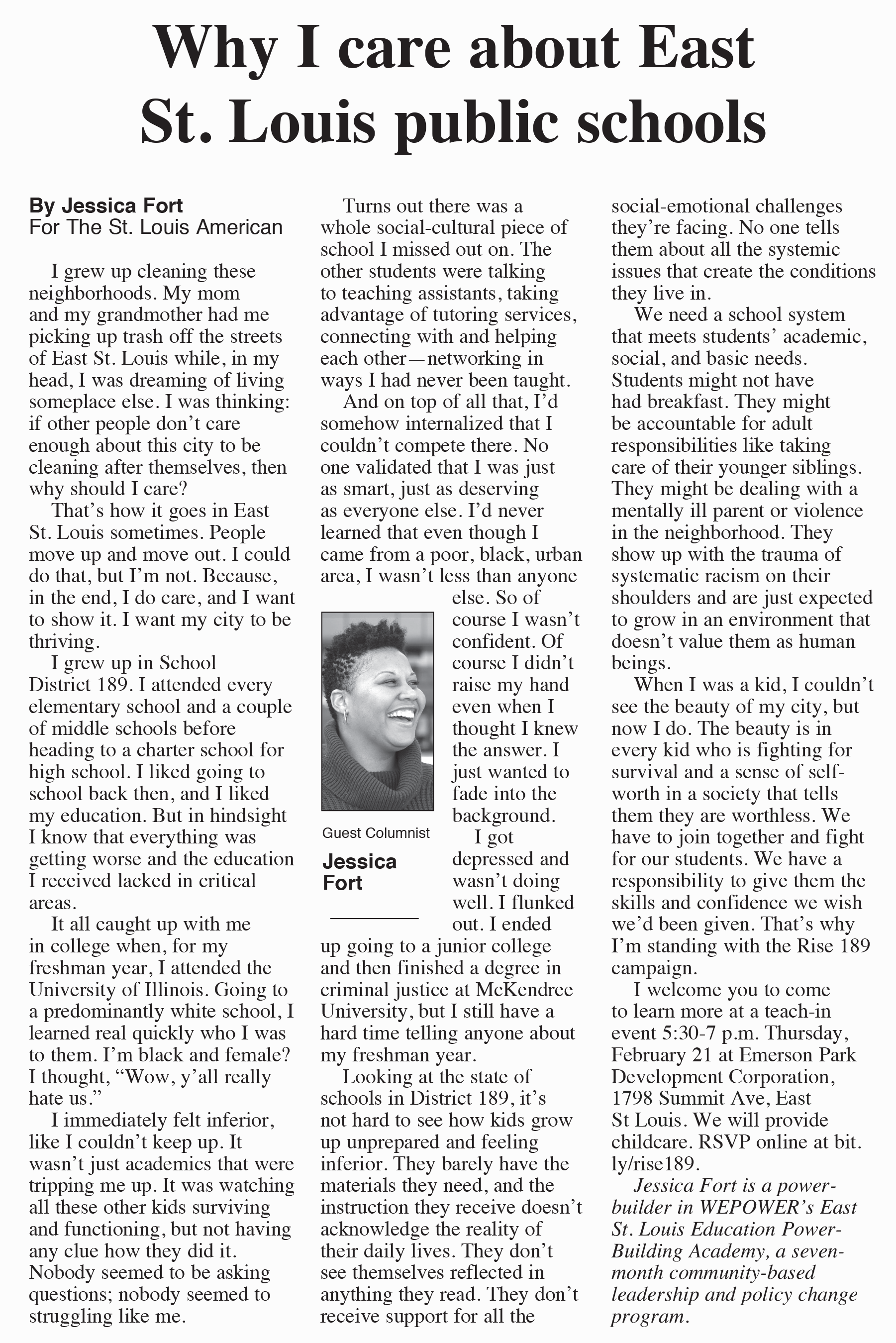